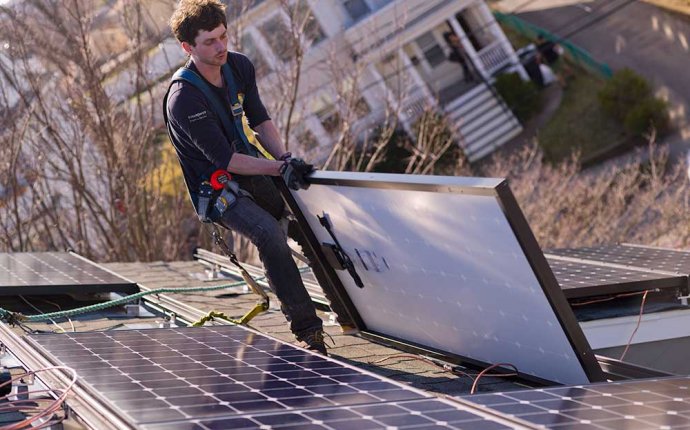 Just out of view on the back side of Rob and Irene Kneeland’s Colonial house in Sutton, 28 photovoltaic panels are transforming light into power every time the sun shines.

The system came online in December. By March, the Kneelands’ monthly electric bill had dropped from $150 to $38.

“I imagine the next bill will be about zero, ” Rob Kneeland said. “It appears that they’re performing as promised.”

Historically, installing solar panels was a pricey proposition — usually something only committed environmentalists with money to spend did. In recent years, however, improvements in technology, falling manufacturing costs, government incentives, and worries about the perils of fossil fuel dependence have come together to accelerate the adoption of solar technologies among everyday homeowners.

Get Talking Points in your inbox:

An afternoon recap of the day’s most important business news, delivered weekdays.

Between late 2013 and mid-2016, Massachusetts’ solar capacity more than tripled, from 362 megawatts to 1, 174 megawatts, according to numbers from regional electric grid operator ISO-New England.

If you want to consider joining the surge, here’s how it works.

First, determine whether solar panels are feasible for your home. Generally, you will need a roof that isn’t facing north and doesn’t receive too much shade from the south, said Andrew Belden, senior director for renewable energy generation at the Massachusetts Clean Energy Center.

Your roof should also be large enough to accommodate at least 10 to 15 panels and be relatively new.

“You want to make sure you’re not going to be taking the system down in the next five years to replace your roof, ” Belden said. Just about all installers will provide a free on-site assessment.

Next, study up on the basic economics of residential solar. In the past, leasing and power purchase agreements were popular ways for homeowners to get solar power. Under such arrangements, a business builds and retains ownership of a solar system then sells the energy produced to the homeowner.

But today, the price of a residential solar installation is about one-third what it was just 10 years ago, according to a report from the Lawrence Berkeley National Laboratory. At the same time, financing options have multiplied, making straightforward ownership more economically advantageous.

The median price per watt of capacity for systems financed through the Mass Solar Loan Program is $4, and the median installation size is 8.1 kilowatts. Those numbers suggest a new solar system could easily run more than $30, 000.

Fortunately, several programs can help defray the costs. Federal tax incentives allow you to take a credit worth 30 percent of the cost of the installation. Massachusetts also offers a tax credit of 15 percent of the remaining cost after the federal incentive has been subtracted, with a maximum value of $1, 000.

Together, these credits could reduce the cost of a $30, 000 system to roughly $20, 000 — still a pretty hefty total. To help cover that balance, the Mass. Solar Loan Program will assist you in locating a participating bank or credit union and, for income-eligible households, it also can provide further financial assistance.

Once the system is installed, ongoing savings will come from two places: net metering and solar renewable energy credits, or SRECs.

When your system is producing more power than you use, the excess electricity flows back into the grid and your meter runs backward, deducting kilowatt-hours from your usage — and your bill. This phenomenon is known as net metering.