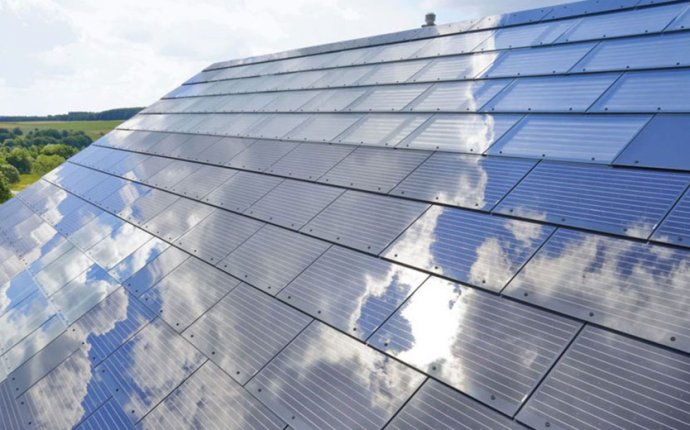 Tesla says the tempered glass is “tough as steel, ” and can weather a lifetime of abuse from the elements. It can also be fitted with heating elements to melt snow in colder climates. “It’s never going to wear out, ” Musk said, “It’s made of quartz. It has a quasi-infinite lifetime.”

In a Q&A with reporters after the presentation, Musk said the tiles are comparable to competing high-efficiency solar panels. The current prototypes that Tesla engineers are working with reduce the efficiency of the underlying solar cell by just 2 percent. With further refinement, Musk said he hopes the microscopic louvers responsible for making the tiles appear opaque can be used to actually boost the efficiency of standard photovoltaic cells.

This, apparently, is a solar roof.

Putting the pieces together

The vision presented at Universal Studios in Los Angeles is the grand unification of Musk’s clean-energy ambitions. The audience was able to step into a future powered entirely by Tesla: a house topped with sculpted Tuscan solar tiles, where night-time electricity is stored in two sleek wall-hung Powerwall batteries, and where a Model 3 prototype electric car sits parked out front within reach of the home’s car charger.

Attracting less attention on Wisteria Lane was Tesla’s Powerwall 2, a major upgrade of its home battery for electricity storage. When the original Powerwall was released last year, I was skeptical. Mostly, it was just too pricey for the amount of power it provided, especially in the U.S. where electricity is cheap and most people can sell their excess solar power back to the grid. Version 2 is a much different product. It packs more than twice the capacity—14 kilowatt hours versus 6.4 kilowatt hours—for a cheaper price after installation. It includes a built-in Tesla-brand inverter and comes with a ten year, infinite-cycle warranty.

More power to ya.

Electricity storage is crucial for future uptake of solar power. Already in some solar-heavy regions, more electricity is being produced during the middle of the day than people can consume, and utility prices spike in the evening hours when the sun goes down. In the U.S., some states are abandoning payments for daytime rooftop solar, undermining huge investments that families have made in their solar systems. The only recourse is for customers to use that electricity themselves, at night.

Like previous attempts at solar shingles, the solar-plus-battery package hasn’t really caught on yet. SolarCity’s total bundled sales thus far number in just the hundreds. But an argument can be made that the products just weren't compelling enough yet and the prices were still too high.

The Powerwall 2 may be the cheapest lithium ion battery for the home ever made when deliveries start in January. Tesla is selling the batteries at retail prices that are cheaper than the average manufacturing cost at most companies, according to data compiled by Bloomberg New Energy Finance. We "certainly expect it will move the market prices downwards as we saw last year with the first Powerwall, " said Yayoi Sekine, a BNEF analyst who covers battery technology.

“The future is going to overwhelmingly be solar plus battery, ” Musk said. "They go together like peanut butter and jelly."

Powerwall 2 looks ready for primetime. The new solar shingles? Let’s wait until more details emerge. Tesla says we should expect a slow initial rollout beginning in about nine months. Within two years of production, the shingles could account for five percent of the five million roofs installed in the U.S. every year, said Peter Rive, SolarCity’s co-founder and chief technology officer. SolarCity, under the Tesla brand, would also manufacture and sell surface-mounted solar panels for homeowners who have no plans for replacing their existing roofs.

The pricing on the new solar roof is a bit—squishy. Musk said that someone who buys a Tesla roof will save money compared with someone who buys a comparable traditional roof plus electricity from the grid. But make no mistake: This will be a premium product, at least when it first rolls out. The terra cotta and slate roofs Tesla mimicked are among the most expensive roofing materials on the market. SolarCity CEO Lyndon Rive noted that the price of a conventional roof can vary widely, from $7, 000 to $70, 000—based on materials, size, complexity, location—so giving out firm prices of a solar roof at this point would be difficult.

“It is the metaphoric 'super-car' of residential solar, ” said BNEF solar analyst Hugh Bromley. “It portrays cutting-edge technology with broad appeal, but … it competes in a solar market where most customers are comfortable in a family sedan.”

Exclusive insights on technology around the world.

Get Fully Charged, from Bloomberg Technology.

Telsa will release more financial information about the SolarCity deal this week before it goes to shareholders for a vote. If all of Musk's plans come true, by the end of next year you'll be able to walk into a Tesla store, buy a Model 3 electric car, a slate-glass solar roof, and a Powerwall 2 to manage the flow of all those electrons in your life. There are a lot of details to be hammered out until we know for certain whether Musk’s vision for a grand unification will become more than just a great television backdrop. But these tiles, viewed up close, are definitely worth tuning in for.