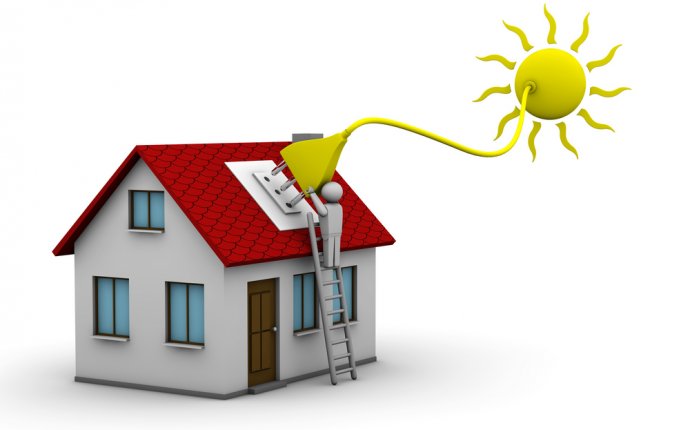 Just over a year ago, we took the plunge at my house in southeastern Pennsylvania and covered the back roof with solar panels: 41 of them, to be exact. After 12 months we’ve created 13.8 megawatt hours of electricity while using only 7.59 megawatt hours. The energy surplus becomes a credit on our electric bill, and once per year our electric company issues us a check for any unused credit. So what was the installation and usage experience like? Overall it has been excellent, and I’ll share the pros, cons, and actual costs of our project in an effort to shed more light on any solar panel projects you might be considering.

Our family has always tried to be green when possible. We’re avid recyclers, we tried a small composting project, we use CFL or LED bulbs throughout the house, and I can’t tell you how many solar-powered chargers I’ve tried for my mobile devices. (The most recent one is outstanding.) But we never had the money to “go solar” even though we wanted to. That changed due to a unique financial situation. In the spirit of transparency, I’m going to share the details.

My wife inherited a family member’s IRA account several years ago, and the law required that the funds be liquidated over a five-year period. We got to the final year in 2011 and realized we were going to be hit with a large tax bill on the remaining IRA funds and decided to invest the funds into something with a tax incentive. After much research on solar energy—this is a great site to estimate system sizing, pricing, and benefits—return on investment and such, we decided to go with solar panels, moved in part because our rear roof faces south.

It turns out that a local contractor nearby put solar panels on his office and became a certified solar panel installer. I requested a number of quotes from companies in the area, but he gave the best price at the time: $5.50 per watt. I then looked at our electricity usage for the prior year—we’re a family of four, with two full-time work-at-home people—and overspecified the system by 25 percent capacity for two reasons. We have a four bedroom house, so I planned for the next homeowner to have five occupants. And I wanted to maximize the tax benefit, which was a 30 percent federal tax credit on the entire project.

It’s also worth considering that companies in some states offer no-money-down solar panel systems: Essentially you let them install a system on your property and then lease the system. The company itself reaps the incentive benefits, but you may save money on your electricity bill.

I had thought the system would be complicated by many parts, but it’s actually quite simple. Obviously, we have the panels, which generate electricity from sunlight. All that power is DC, or direct current, so the system needs an inverter for AC power. We considered one single inverter but instead opted for individual microinverters attached to every panel. There are several benefits to this approach.

For starters, if one panel or inverter fails, it’s easier to locate and fix the issue. Second, the microinverters feed real-time data from every panel via Ethernet over the power line to a small Web server included for monitoring purposes. I can get tons of useful information from the system. You can view most of my system details here online, for example.

The microinverters, as well as the small Web server that tracks them, are made by Enphase. Each one converts the DC power from its connected panel to AC power. Each microinverter is linked to the next one in the solar panel array, so essentially these are plug-and-play devices. Each connects to the next, and the last microinverter feeds a power line, which we fed through our attic and down along the outside of our house near our electrical meter. The panels themselves are attached to the roof with aluminum framing, so the install process is fairly simple: Install the frame, connect the microinverters to their respective panels, attach the panels to the frame, and link the microinverters.

Because of the solar panels, two additional electrical meters were needed. We still have the original meter that measures our electricity use from the grid, but we need a new meter to measure power output, and a third to measure the difference between electricity created and used. More on that in bit.

In a word: great! In this graph below—from Enlighten’s Web service that creates reports from our solar panel system—you can see exactly how much energy we produced on a daily basis.

In fact, this graph gives you a rough history of the weather where we live. The drops on the graph represent days with little or no sun, although even on a cloudy day we make a little energy. You can also see when the days get longer and provide more direct sunlight to our roof; we’re in the downward trend now, as the shortest day of the year is approaching. Here’s a look at the numbers for production and usage by month:
There’s no maintenance to the system; it’s just always working to create power when there’s enough light. I haven’t yet had to do a thing to the panels, which have a 25-year warranty, same as the microinverters. So with the solar panels then, you’d think we’d be fine during a power outage, like the one we experienced for four days last week. Not quite ….

One of the upfront decisions you’ll need to make when planning a solar panel system is, will you still be tied to the electric grid? Or will you go off-grid? There are pros and cons to each; the former costs less up front, while the latter provides stored power during the evening hours or during an outage. Since we had no power during Hurricane Sandy, you can guess which system we have: One that keeps us tied to the grid.

That means all the power our panels create is actually fed back into the grid; we still get all our power from our electric company in this configuration. And in the case of an outage, grid-tie systems such as ours are automatically disabled. Why? Because if we were feeding power into the grid during an outage, it would be unsafe for the workers trying to fix the outage.

To go completely off grid and have batteries store excess power would have added approximately 20 percent to our up-front costs. My wife felt we’d never regain that cost because we rarely have outages. During Hurricane Sandy, of course, I gave her one—and only one—light-hearted “I told you so.” And at this point, I’m reconsidering what to do for backup power, but that’s another post for another time.

Is solar right for you? I can’t answer that question, but hopefully I’ve provided some insights to help you decide. Having a house with some south-facing roof is a must unless you plan to have panels on your grounds. Local or state incentives vary by location as well, so you’ll need to check them in your area.

The biggest issue for most is likely the large up-front costs involved, although you could start small and build up the system over time. I can’t argue that the costs are still high, although they should be lower now than a year ago. And the payback period—which will vary based on your system, location, and energy costs without solar—can be high. Our break-even point is around 7.3 years, but that includes the home appreciation expected due to the system.