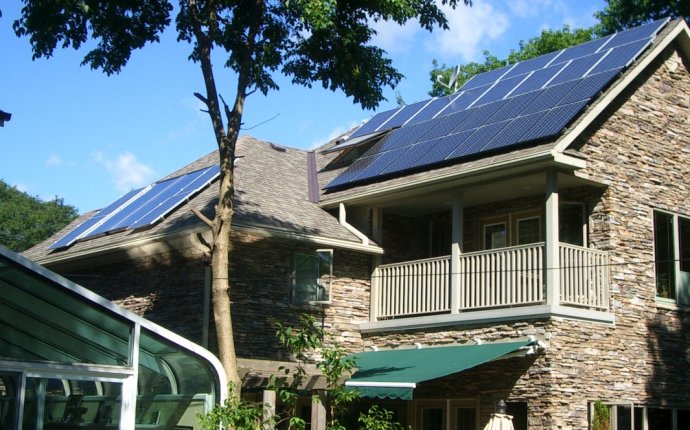 Mike Brigham got interested in solar power by accident in 1985 when he bought a tiny island in Georgian Bay with a quaint cottage with no electricity.

After learning he would have to pay to up to $15, 000 to bring in electricity via cable and pay a bill year-round despite using the cottage for only a few months, he decided to install his first solar panel.

Since then, he's upgraded the system at the cottage several times and when he went looking for a lot in Toronto in 2008, he sought out one with ample access to the sun's rays.

'When solar generates the most is on summer days when days when aircon loads are really driving up the peaks and the cost of power in the middle of the day goes way up.' - Mike Brigham, Solar Share Co-op

He now has a 5.8-kilowatt solar system on the roof of the home he built in Toronto and sells the power back to the grid under Ontario's MicroFIT program.

And like every homeowner and farm property owner who has taken advantage of Ontario's FIT, or feed-in tariff, program for solar, he has to pay income tax on the cash he earns from selling power back to the local utility.

It's not just Ontario where small operators are dealing with the tax implications of small solar projects. A feed-in tariff scheme has encouraged community and private solar systems in New Brunswick and Nova Scotia, and British Columbia is beginning a standing offer program for clean energy projects under 15 kilowatts. In Alberta, a plan is under discussion.

With climate change on the agenda again after the Paris Climate Summit, other provinces will be studying ways to boost generation from renewables, as Ontario and some U.S. states have done successfully with incentives for generations.

The capital cost of panels, cost of installation and hookup to the grid and later costs such as roof repair or insurance can be written off over a period of years.

The Ontario Power Authority's prices for electricity range from 8 to 17 cents a kilowatt hour, depending on when the power is used.

The feed-in tariff for small solar systems under 10 kilowatts, dubbed MicroFIT, was set as high as 80 cents a kilowatt hour in 2009. It has been falling ever since and as of this month will be 29.4 cents.

"The intent was always that it would start off at a high price and taper down quickly as the cost of systems installed came down, " Brigham said.

The high initial price Ontario offered for solar projects has drawn the ire of critics, including auditor Bonnie Lysyk, who say renewable sources are pushing up the cost of power in the province.

Brigham says that's a misunderstanding. Solar actually replaces peak power — the electricity needed when there is the greatest demand. That is often the most expensive power to produce.

"When solar generates the most is on summer days when aircon loads are really driving up the peaks and the cost of power in the middle of the day goes way up, " he said.

And it's doing it without the capital cost to the taxpayer of another natural gas plant or nuclear plant, as the $18, 000 to $50, 000 cost of installation is born by the homeowner.

Brigham is such a believer in solar's potential that he is president of the Solar Share Co-operative, which educates the public about solar, sells solar bonds and uses the proceeds to create larger-scale solar systems on rooftops and in open areas.

Homeowners and farmers signed to the MicroFIT program bear the initial capital costs, but are able to write off those costs, gradually, over the life of the contract with the Ontario Power Authority.

How solar income is taxed

Blair Beesley, a solar system installer with SolSmart Energy Systems in Toronto, estimates the average cost of a five-kilowatt system is now about $18, 000, including the hookup. That varies by where in the province you are based, because some utilities charge more than others to connect to the grid and set up an account.

A five-kilowatt system would now generate about $1, 690 a year, though those who signed a 20-year contract with Ontario Power Authority for 80 cents a kilowatt hour could have income of more than $4, 500.

That income can be offset by depreciation costs on the solar system. The original capital cost of the system can be written off over a period of years — some lawyers recommend depreciating the system over the 20-year life of the contract, but it can be done faster.

Depreciation can't be more than what you earn from the panels, but it can include the cost of any feasibility studies or services involved in installing solar.

"It's going to be 12 years before you're really making any income, because of depreciation, the insurance, a little bit of maintenance and so on, it will suck up the generation revenues, " Brigham said.