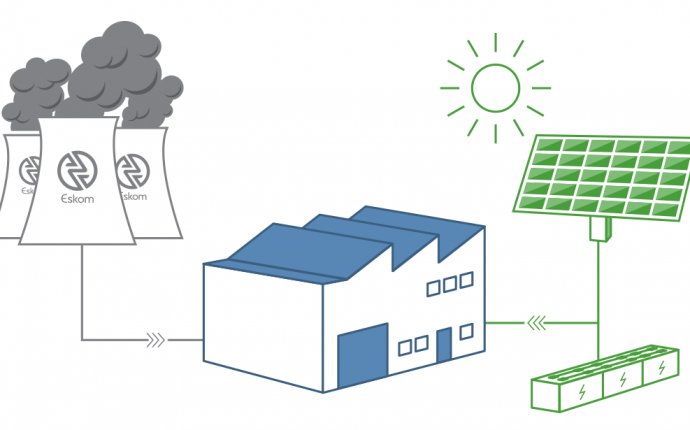 Grid-tied PV systems typically consist of PV modules connected in series to string inverters that convert DC power to AC power, which is then fed directly to the grid. As a building receives this AC energy, it is distributed to appliances and lighting, or other devices where needed.

Any energy that exceeds the regular building usage goes back to the grid. In some cases, the utility issues a credit to the next bill.

{OPENADS=zone=72&float=right}
In a grid-interactive system, however, the inverter has multiple additional functions to perform. Under normal conditions, the inverter maintains the battery in a state of full charge in preparation for use during power outages. When the grid goes down, the grid-interactive inverter seamlessly steps in to invert DC power from both the solar and battery sources into useable AC power to run selected loads.

The system will charge those batteries during the day from the panels or as required from a generator, or both. The grid-interactive inverter can automatically control the generator to run only when required to recharge the batteries, greatly reducing the generator's run time, noise output and fuel consumption.

Additionally, a user can maximize energy savings via peak shaving by taking advantage of using stored energy to offset utility prices when rates are highest and, in turn, only choose to leverage the grid when pricing is most advantageous.

Design criteria for installing a grid-tied system are relatively simple and linear. The energy flow in a grid-tied system is a one-way street and getting electricity back to the grid is usually a cookie-cutter equation. For example, when an installer is sizing a 4 kW PV system, the given array capacity would match with a 4 kW inverter, which feeds into a breaker installed in the main load center.

In a grid-hybrid design, the process is made slightly more challenging by the need to also design the backup capabilities of the system. Questions for an installer to consider include the following: What loads does the system need to run? How much power do these loads consume, and for what duration of power outage does the customer expect to be prepared? What loads are essential?

Every customer's needs for essential loads are unique, but they typically include some mix of lighting, communications, water and refrigeration. What a client decides is critical to run and how long a typical power outage lasts will ultimately determine the components of a grid-interactive installation – including the size of the inverter, the capacity of the energy storage unit, such as a battery bank, and the resulting circuitry for the system.

Finally, the installer must install a protected load panel and then decide with the client which loads will be run by backup power. Determining which loads in the house to move and then physically routing circuits to the panel can take additional time.

Extra investment?
There is no question that financial impacts drive the majority of solar power system decisions. The grid-tied market is driven by incentives and, although the buy-down model that dominates much of the industry has the benefit of driving down the cost per installed watt to the lowest possible price in markets that have a saturation of solar, it has the unfortunate potential side effect of penalizing installer margins and profitability as solar becomes a commodity.

Some installers may see a differentiating push where customers are willing to pay more in a market; having an add-in of providing additional stability and reliability can make the difference between profit and loss for an installer.
{OPENADS=zone=72}
Both grid-interactive and grid-tied systems offer environmental attributes and make their owners money by qualifying them for production credits, available along with lower electricity costs. Both also significantly improve the resale value and marketability of homes and other buildings.

Why would a customer make the extra investment in the grid-interactive option? The traditional utility-provided electrical service is favorable when it works in a predictable way, but unpredictability is increasingly common for two reasons.

First, after several years of severe storms and dangerous weather patterns, grid-tied users are all too familiar with the potential damage of blackouts and brownouts. Some events, such as natural disasters, overloaded utilities and under-investment, may cause prospective solar installations to adopt aspects of grid-hybrid technology for stability.

During adverse grid events, all solar power systems must disconnect and cease exporting to the utility in compliance with national and international industry safety regulations. However, grid-interactive systems are designed to run independently from the grid when needed, whereas grid-tied systems require a stable grid to operate.

Unpredictability can also be caused by politics and local policies. Incentives, production credits, net metering and other benefits are all subject to change or revision as economic and political winds shift.