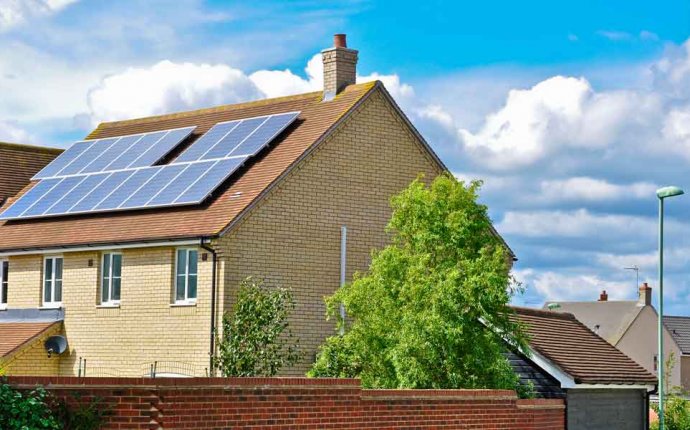 Solar panel electricity systems, also known as photovoltaics (PV), capture the sun's energy using photovoltaic cells. These cells don't need direct sunlight to work – they can still generate some electricity on a cloudy day. The cells convert the sunlight into electricity, which can be used to run household appliances and lighting.

The benefits of solar electricity

PV cells are made from layers of semi-conducting material, usually silicon. When light shines on the cell it creates an electric field across the layers. The stronger the sunshine, the more electricity is produced. Groups of cells are mounted together in panels or modules that can either be mounted on your roof or on the ground.

The power of a PV cell is measured in kilowatts peak (kWp). That's the rate at which it generates energy at peak performance in full direct sunlight during the summer. PV cells come in a variety of shapes and sizes. Most PV systems are made up of panels that fit on top of an existing roof, but you can also fit solar tiles.

Solar tiles are designed to be used in place of ordinary roof tiles. A system made up of solar tiles will typically cost about twice as much as an equivalent panel system. Solar tile systems are not normally as cost-effective as panel systems, and are usually only considered where panels are not considered appropriate for aesthetic or planning reasons.

Tariffs will also be subject to an adjustment for RPI (Retail Prices Index) so may change from those stated in this table.

A 4kWp system can generate around 3, 400 kilowatt hours of electricity a year – roughly equivalent to a typical household's electricity needs. It will save around a ton and a half of carbon dioxide every year.

Please note, the Northern Ireland Renewables Obligation Certificates (NIROCs) scheme is now closed to all technologies since April 2017 and you can’t receive payments from generation tariffs any more. However, you can still cut your electricity bills by using the free electricity generated by solar PV and receive export payments from the electricity excess that you sell to the grid.

Costs can vary between installers and products, so we recommend getting quotes from at least three installers.

Other factors that affect PV installation costs are:

Solar PV needs little maintenance – you'll just need to keep the panels relatively clean and make sure trees don't begin to overshadow them. In the UK panels that are tilted at 15° or more have the benefit of being cleaned by rainfall to ensure optimal performance. Debris is more likely to accumulate if you have ground mounted panels.

Once fitted, your installer should leave written details of any maintenance checks that you should carry out from time to time to ensure everything is working properly. This should include details of the main inverter fault signals and key trouble-shooting guidance. Ideally your installer should demonstrate this to you at the point of handover. Keeping a close eye on your system and the amount of electricity it’s generating (alongside the weather conditions) will familiarise you with what to expect and alert you to when something might be wrong.

The panels should last 25 years or more, but the inverter is likely to need replacing some time during this period, at a cost of about £800. Consult with your installer for exact maintenance requirements before you commit to installing a solar PV system.