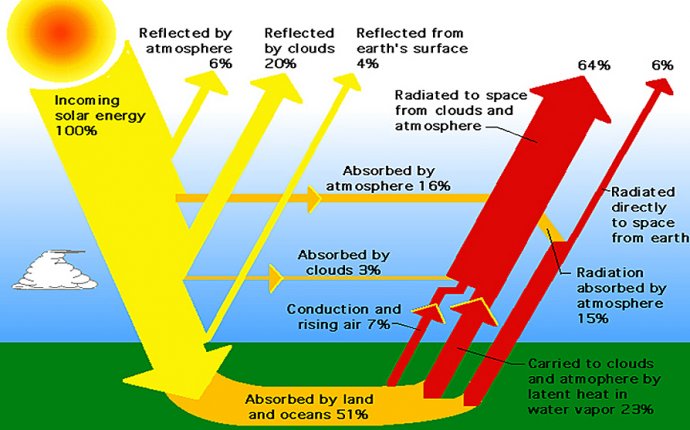 Where do we Get solar Energy From?

Solar energy is energy that comes from the sun. Every day the sun radiates, or sends out, an enormous amount of energy. The sun radiates more energy in one second than people have used since the beginning of time!

Where does all this energy come from? It comes from within the sun itself. Like other stars, the sun is a big gas ball made up mostly of hydrogen and helium. The sun generates energy in its core in a process called nuclear fusion. During nuclear fusion, the sun's extremely high pressure and hot temperature cause hydrogen atoms to come apart and their nuclei (the central cores of the atoms) to fuse or combine. Four hydrogen nuclei fuse to become one helium atom. But the helium atom weighs less than the four nuclei that combined to form it. Some matter is lost during nuclear fusion. The lost matter is emitted into space as radiant energy.

It takes millions of years for the energy in the sun's core to make its way to the solar surface, and then just a little over eight minutes to travel the 93 million miles to earth. The solar energy travels to the earth at a speed of 186, 000 miles per second, the speed of light.

Only a small portion of the energy radiated by the sun into space strikes the earth, one part in two billion. Yet this amount of energy is enormous. Every day enough energy strikes the United States to supply the nation's energy needs for one and a half years!

Where does all this energy go? About 15 percent of the sun's energy that hits the earth is reflected back into space. Another 30 percent is used to evaporate water, which, lifted into the atmosphere, produce's rain-fall. Solar energy also is absorbed by plants, the land, and the oceans. The rest could be used to supply our energy needs.

People have harnessed solar energy for centuries. As early as the 7th century B.C., people used simple magnifying glasses to concentrate the light of the sun into beams so hot they would cause wood to catch fire. Over 100 years ago in France, a scientist used heat from a solar collector to make steam to drive a steam engine.

In the beginning of this century, scientists and engineers began researching ways to use solar energy in earnest. One important development was a remarkably efficient solar boiler invented by Charles Greeley Abbott, an American astrophysicist, in 1936.

The solar water heater gained popularity at this time in Florida, California, and the Southwest. The industry started in the early 1920s and was in full swing just before World War 11. This growth lasted until the mid- 1950s when low-cost natural gas became the primary fuel for heating American homes. The public and world governments remained largely indifferent to the possibilities of solar energy until the oil shortages of the 1970s. Today people use solar energy to heat buildings and water and to generate electricity.

Heating with solar energy is not as easy as you might think. Capturing sunlight and putting it to work is difficult because the solar energy that reaches the earth is spread out over a large area. The sun does not deliver that much energy to any one place at any one time . How much solar energy a place receives depends on several conditions. These include the time of day, the season of the year, the latitude of the area, and the clearness or cloudiness of the sky.

A solar collector is one way to collect heat from the sun. A closed car on a sunny day is like a solar collector. As sunlight passes through the car's glass windows, it is absorbed by the seat covers, walls, and floor of the car. The light that is absorbed changes into heat. The car's glass windows let light in, but don't let all the heat out. (This is also why greenhouses work so well and stay warm year-round.)

So, a solar collector does three things:

In a passive solar home, the whole house operates as a solar collector. A passive house does not use any special mechanical equipment such as pipes, ducts, fans, or pumps to transfer the heat that the house collects on sunny days. Instead, a passive solar home relies on properly oriented windows. Since the sun shines from the south in North America, passive solar homes are built so that most of the windows face south. They have very few or no windows on the north side.

A passive solar home converts solar energy into heat just as a closed car does. Sunlight passes through a home's windows and is absorbed in the walls and floors.

To control the amount of heat in a passive solar house, the doors and windows are closed or opened to keep heated air in or to let it out. At night, special heavy curtains or shades are pulled over the windows to keep the daytime beat inside the house. In the summer, awnings or roof overhangs help to cool the house by shading the windows from the high summer sun.

Heating a house by warming the walls or floors is more comfortable than heating the air inside a house. It is not so drafty. And passive buildings are quiet, peaceful places to live. A passive solar home can get 50 to 80 percent of the heat it needs from the sun.

Unlike a passive solar home, an active solar home uses mechanical equipment, such as pumps and blowers, and an outside source of energy to help heat the house when solar energy is not enough.

Active systems use special solar collectors that look like boxes covered with glass. Dark-colored metal plates inside the boxes absorb the sunlight and change it into heat. (Black absorbs sunlight more than any other color.)

Air or a liquid flows through the collectors and is warmed by this heat. The warmed air or liquid is then distributed to the rest of the house just as it would be with an ordinary furnace system.

Solar collectors are usually placed high on roofs where they can collect the most sunlight. They are also put on the south side of the roof where no tall trees or tall buildings will shade them.

The challenge confronting any solar heating system-whether passive, active, or hybrid-is heat storage. Solar heating systems must have some way to store the heat that is collected on sunny days to keep people warm at night or on cloudy days.

In passive solar homes, heat is stored by using dense interior materials that retain heat well-masonry, adobe, concrete, stone, or water. These materials absorb surplus heat and radiate it back into the room after dark. Some passive homes have walls up to one foot thick.

In active solar homes, heat may be stored in one of two ways-a large tank may store a hot liquid, or rock bins beneath a house may store hot air.

Houses with active or passive solar heating systems may also have furnaces, wood-burning stoves, or another heat source to provide heat in case there is a long period of cold or cloudy weather. This is called a backup system.

Solar energy is also used to heat water. Water heating is usually the second leading home energy expense, costing the average family over $400, a year. Depending on where you live, and how much hot water your family uses, a solar water heater can pay for itself in as little as five years. A well-maintained system can last 15-20 years, longer than a conventional water heater.