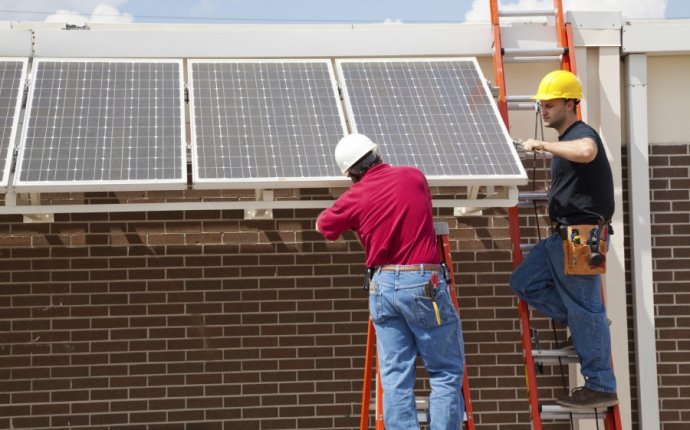 The answers are very different, even mutually exclusive, depending on whether you:

If you're interested in green power, or you want to lower your environmental footprint, and the grid is available, the worst thing you can do is hook up a photovoltaic solar-battery-inverter system. That leaves solar heating, and photovoltaics that augment the grid (either directly, or at least without dragging unnecessary battery systems into the equation thus creating a much higher environmental cost than even dirty coal-fired grid power). Solar heating has been covered, so, photovoltaics:

Augmenting the grid directly is the best option, but is a large upfront cost (probably high four digit) that will only pay off after many years. This is where your solar panels are connected to the grid such that the grid buys any power generation that you're not using, from you. This kind of setup may be The Way Of The Future, but I'm assuming it's Too Much Too Soon for you, so I'll ignore it :)

Augmenting the grid supply to your home, but without using a battery-inverter system, cuts out a lot of what photovoltaic can do (and example of self-reliance solar being at loggerheads with environmental solar), so I would suggest building a solar charging station for charging all your battery devices (laptop, mp3, cellphone, flashlight batteries, and so on).

This is because:
- Even a small solar panel can charge these devices, it's (usually) just a matter of time
- You're already used to leaving the devices to charge when not in use, so the not-always-on nature of batteryless solar is less of an issue.
- It's really cheap and simple - just a solar panel and an inverter. No battery. No battery monitoring system, etc. Sometimes it's just a solar panel! (if your existing charger accepts 12V input and isn't too fussy about the voltage being ballpark)
- Providing it's in constant use for many years, it's about as green as photovoltaic gets.

Conversely, if you're into solar for self-reliance / self-sufficiency reasons and damn the environment, then you'll want a panel-battery-inverter system. But really, you'd be better off with grid + emergency generator, (and it might be worth your time to look into DIY wind too). This is stuff is hardly alternative though. It's a very well-trodden path

If you have a panel-battery-inverter system, then generally the first thing people migrate to the solar power is the lights, as fluorescent lights draw relatively little so even a $500 battery is decent, and it's no great crisis if the battery is drained, since lights aren't important and there are always flashlights (and the grid, if it's not a blackout).

From that point, any domestic appliance that doesn't draw much power, is good for solar. "Not much power" is a relative term, but unless you're buying serious battery storage for serious $$$, I think of "not much" as meaning a device that is "ranging from 25 watts but fairly intermittent use to less than 2 watts if in constant use", and you'll get away with higher powered items for very very short durations.

Or think of it this way: A solar panel says it is 50 Watts. If it's mounted in a fixed angle bracket rather than a motorised heliostat, you're going to get more like 30 Watts, and that's only going to be for say, five or six hours during summer (more if you're close to the equator), so 180 Watt-hours per day. Say 50% chance of cloud or rain over the year, so let's make that 100 w/h/d average. Battery charging and other losses will steal another 10-20%.
So given unlimited storage. on average you could run a single 25watt CFL bulb for a little over three hours each evening. Or two bulbs for under two hours.
Now, I just pulled those numbers out of my ass, but they are based on a fair bit of experience with solar panels, from which the consistent lesson I have learned has been that I always end up with only a fraction of the power that I feel I should have. :-)
I don't know if these guesstimate numbers are remotely accurate, but I wonder if this makes a useful rule of thunk - taking the watt output of the panel, double that number, and you get a guesstimate of the watt-hours-per-average-day. It depends greatly on where you live though.

So what's stopping you just paying more to get a bigger solar panel? There is an environmental footprint concern there, if that is an issue - if you buy more panel than you regularly use (and don't hook it up to feed back into the grid) most of its potential generation goes to waste, and since the environmental impact of panels is paid upfront, a too over-sized and under-used panel risks leaving a larger footprint than just using coal-fired grid power instead.