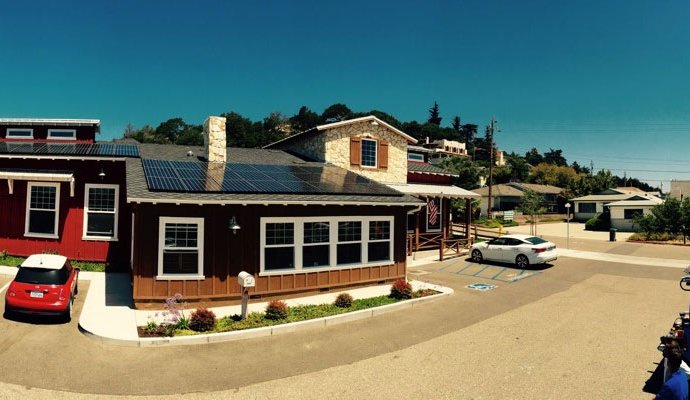 We can trace all energy used on our planet back to the source...the nearest star, our sun. The history of solar energy is as old as humankind. In the last two centuries, we started using Sun's energy directly to make electricity.

In 1839, Alexandre Edmond Becquerel (pictured on the right) discovered that certain materials produced small amounts of electric current when exposed to light.

William Grylls Adams, who, with his student, Richard Evans Day, discovered in 1876 that a solid material - selenium - produced electricity when exposed to light. Selenium photovoltaic cells were converting light to electricity at 1 to 2 percent efficiency.

Photovoltaic, or PV for short, is the word that describes converting sunlight into electricity: photo, meaning pertaining to light, and voltaic meaning producing voltage. It took, more than 100 years, however, for the concept of electricity from sunlight to become more than an just an experiment.

Birth of the PV Cell

The next year, the Hoffman Electronics-Semiconductor Division announced the first commercial photovoltaic product that was 2 percent efficient, priced at $25 per cell, at 14 milliwatts each, or $1, 785 per watt (in 1955 dollars).

By the mid-1960s, efficiency levels were nearing 10 percent. As an outgrowth of the space exploration in the 1960s-70s, PV development increased dramatically. But world wide hostilities and the threat of war turned the world more and more away from oil and toward renewable energy.

In 1978, Congress passed the Public Utility Regulatory Policy Act or PURPA. It established the right for independent power producers to interconnect with the local utility distribution system. PURPA allowed large utility scale applications of PV and other solar electricity systems. Among other things, this federal legislation required utilities to buy electric power from private "qualifying facilities, " at an avoided cost rate. This avoided cost rate is equivalent to what it would have otherwise cost the utility to generate or purchase that power themselves. Utilities must further provide customers who choose to self-generate a reasonably priced back-up supply of electricity. For small systems, such as a residential rooftop PV system, however, these protocols did not help the growth of small systems.

The Energy Tax Act (ETA) of 1978 (Public Law 9-618) was passed by Congress in response to the energy crises of the 1970's - the Arab Oil Embargo and the taking of U.S. hostages in Iran. The act encouraged homeowners to invest in energy conservation and solar and wind technologies through tax credits. A federal energy tax credit of up to $2, 000 was given for devices installed on people's homes on or after April 20, 1977 and before January 1, 1986. Solar space and water heating carried a 40% tax credit, while weatherization, insulation, and similar conservation activities carried a 15% tax credit. However, the incentives were phased-out in the mid-80's as a result of Reagan administration policies to leave energy conservation and renewable energy decisions up to market conditions.

In 1979, ARCO Solar began construction of the world's largest PV manufacturing facility in Camarillo, California. ARCO Solar was the first company to produce more than 1 megawatt (MW) of PV modules in one year. Four years later, ARCO Solar dedicated a 6 megawatt PV facility in central California in the Carrissa Plain. The 120-acre unmanned facility supplied the Pacific Gas and Electric Company utility grid with enough power for about 2, 500 homes. ARCO Solar built a 1 MW PV power plant with modules on over 108 double-axis trackers in Hesperia, California.

Solar One began the first test of a large-scale thermal solar tower, power plant. Solar One was designed by the Department of Energy (DOE), Southern California Edison, Los Angeles Department of Water and Power, and the California Energy Commission. It was located in Daggett, California, which is about 10 miles east of Barstow.

Solar One's method of collecting power was based on concentrating the sun's energy to produce heat and run a generator. A total of 1818 mirrors, or heliostats, would track the sun across the sky and reflect the sun's light to the top of a large tower. A black-colored receiver, on top of the tower, transferred the heat to an oil heat-transfer fluid. The heated oil was then used to boil water, which turned turbines and generators. Solar One produced 10 MW of electricity. It was completed in 1981 and produced power from 1982 to 1986.

In 1984, the Sacramento Municipal Utility District dedicated a 1.0 MW photovoltaic power plant to operate near the Rancho Seco Nuclear Power Plant south of Sacramento. That was later expanded to two megawatts.

In 1986, the world's largest solar thermal electricity facility began to be built in California's Mojave Desert. The LUZ Solar Energy Generating Stations (or LUZ-SEGS) contains rows of mirrors that concentrate the sun's energy onto a system of pipes circulating a heat-transfer fluid. The heated transfer fluid is used to produce steam, which powers a conventional turbine to generate electricity. All told, more than 300 megawatts of solar thermal electricity were built before the company had financial difficulties and was sold. They are still producing power today, 20 years later!

1996, the U.S. Department of Energy and an industry consortium begin operating Solar Two - an upgrade of the Solar One concentrating solar power tower. Until the project's end in 1999, Solar Two demonstrated how solar energy can be stored efficiently and economically so power is produced even when the sun isn't shining; it also spurred commercial interest in power towers.