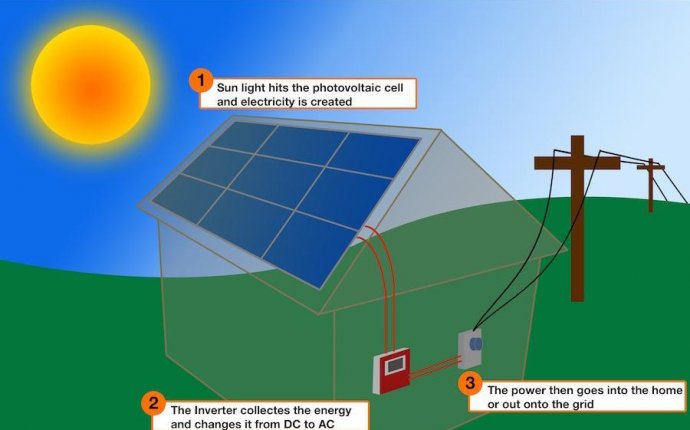 Partial shading of even one cell on a 36-cell solar panel, will reduce its power output. Because all cells are connected in a series string, the weakest cell will bring the others down to its reduced power level. Therefore, whether 1/2 of one cell is shaded, or 1/2 a row of cells is shaded, (as shown above), the power decrease will be the same and proportional to the percentage of area shaded, in this case 50%.

When a full cell is shaded, it can consume energy produced by the remainder of the cells, and trigger the solar panel to protect itself. The solar panel will route the power around that series string. If even one full cell in a series string is shaded, as seen on the right, it will likely cause the module to reduce its power level to 1/2 of its full available value. If a row of cells at the bottom of a solar panel is fully shaded, as seen in Figure 7, the power output may drop to zero. The best way to avoid a drop in output power is to avoid shading whenever possible.

To capture the maximum amount of solar radiation over the course of a year, a solar array should be tilted at an angle approximately equal to a site's latitude, and facing 15 degrees of due south. To optimize winter performance, the solar array can be tilted 15 degrees more than the latitude angle, and to optimize summer performance, 15 degrees less than the latitude angle. At any given instant, an array will output maximum available power when pointed directly at the sun.

To compare the energy output of your array to its optimum value, you will need to know the site's latitude, and actual tilt angle of your array-which may be the slope of your roof if your array is flush-mounted. If your solar array tilt is within 15% of the latitude angle, you can expect a reduction of 5% or less in your system's annual energy production. If your solar array tilt is greater than 15 degrees off the latitude angle, the reduction in your system's annual energy production may fall by as much as 15% from its peak available value. During the winter months at higher latitude, the reduction will be greater.

Maximum power is derived at the knee of the curve. Check the amperage generated by the solar array at your battery's present operating voltage to better calculate the actual power developed at your voltages and temperatures.

Azimuth Angle and Magnetic Declination
If a south-facing roof is unavailable, an east or west-facing surface is the next best option. (SolarEdge and Microinverter Solar Power Gridtied systems allow for your solar panels to be facing more than one direction, while centralized grid-tied inverter systems allow for only one orientation.) Be aware that solar power output decreases proportionally with a horizontal angle or "azimuth, " greater than 15 degrees from due south. The decrease in annual power output from a latitude-tilted east or west-facing array may be as much as 15% or more in the lower latitudes or as much as 25% or more in the higher latitudes of the United States. Avoid directing your tilted solar panels northwest, north or northeast, as you'll get little power output.