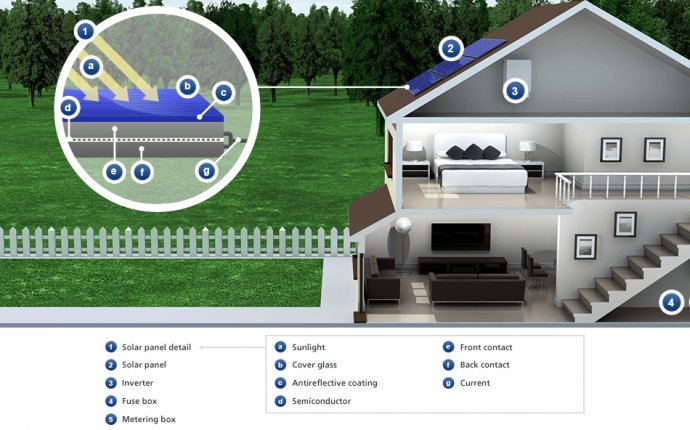 How to Generate solar Power at Home?

People who are new to how residential solar power works often ask these two questions:

Most grid-tied photovoltaic (PV) solar systems today have no way of storing the electricity generated by their rooftop solar energy systems to use later. That means when your solar panels produce electricity, it goes first to powering the lights, appliances and electronics in your home.

If your solar power system produces less electricity than you need or if you need energy when the sun isn’t shining at all, that power is automatically supplied from the utility grid.

In states without net metering, the law generally provides that you are paid for the excess electricity at the so-called “avoided cost” of electricity, meaning the rate that the utility would have had to pay to produce or purchase that electricity from another source (generally the wholesale cost of power).

So the most common answer to the first question – what happens when solar panels generate more electricity than the homeowner can use during the day – is that, in an area that has net metering, the excess electricity flows back to the grid to serve nearby neighbors while your meter essentially runs backwards.

The answer to the second question – how to power a solar home at night – is that the homeowner uses electricity from the grid when the solar power system is not generating enough to power the home’s needs. But with net metering, the homeowner is only billed for the “net” energy used each month, that is, the difference between the energy produced by the solar power system and the energy consumed by the house over the monthly billing period. (Solar energy storage via a battery system is being tested by SunPower in partnership with Sunverge.)

The benefits of net metering

Net metering makes residential solar energy system ownership even more attractive and affordable for many families. It can save homeowners hundreds more dollars per year on their utility bills, and it makes the process of accounting for the energy flowing to and from the utility simpler and easier to administer.

Forty-four states have adopted net metering policies and several others have adopted voluntary utility programs to encourage the practice (with varying levels of cooperation and success). However, some investor-owned traditional utilities are resistant to net metering. They see it as contributing to a loss of revenue from having customers produce their own electricity. The benefits come mostly from generating electricity near the point of use, which in turn reduces strain on the grid’s distribution infrastructure and minimizes energy loss from sending voltage over long distances.

While some electricity providers claim that net metering only benefits a few solar users at the expense of the majority of ratepayers, several states – including Missouri, Vermont, New York, Texas and Nevada – have conducted cost-benefit studies demonstrating a net benefit for all customers, not just those with solar power systems.

Does my state offer net metering?

Visit the Database of State Incentives for Renewables & Efficiency® (DSIRE®) to learn about your state’s current programs. If you don’t see net metering or other policies you think your state should adopt, the Solar Energy Industries Association® (SEIA) offers consumer advocacy programs for net metering and other pro-solar energy policies that help home and business owners take more control of their electricity sources and bills.